1919 was not a good year for race relations in the United States. If you are like me, the term “Red Summer” is new to you. The term is used to describe the many racial conflicts that happened all over the US that year.

One of the less deadly conflicts – with only 1 death recorded – happened in Longview, Texas. To start the story, a black man and a white woman were caught together in a bedroom. The man was jailed, and then killed. Exactly how he was killed is disputed but it was not in the course of justice. The situation was reported in a newspaper. The report was believed to have been written by Samuel Jones, and the woman’s brothers beat him with a wrench for it, despite his denial that he wrote it.

Naturally, tensions were high following this. Late at night a group of men approached Mr. Jones’ home. A group of black men had gathered there to defend Mr. Jones and the doctor attending him, Dr. Davis, while Mr. Jones was physically fragile from the beating he had gotten. These guards shot at the approaching mob and injured three out of 25. One of the white men hid nearby and he was severely beaten when he was found.

Enraged, the white men rang the fire bell to gather more people and returned to Mr. Jones’ home. They found no one home, so they burned not only his house, but several other buildings as well, including a dance hall where it was rumored that ammunition was kept, and at least one vehicle too.

The one man who died in all of this was the Doctor’s father in law, Marion Bush. He had run away from the sheriff. The sheriff called a farmer who lived in the direction the man ran, and the farmer shot and killed him.

A unique aspect of this incident is that when the federal troops came in, requested by the sheriff and a judge, and then additional forces requested by the Mayor after Mr. Bush’s death, all residents of the city including law enforcement were asked to turn in their weapons. Once the unrest passed, the guns were returned. 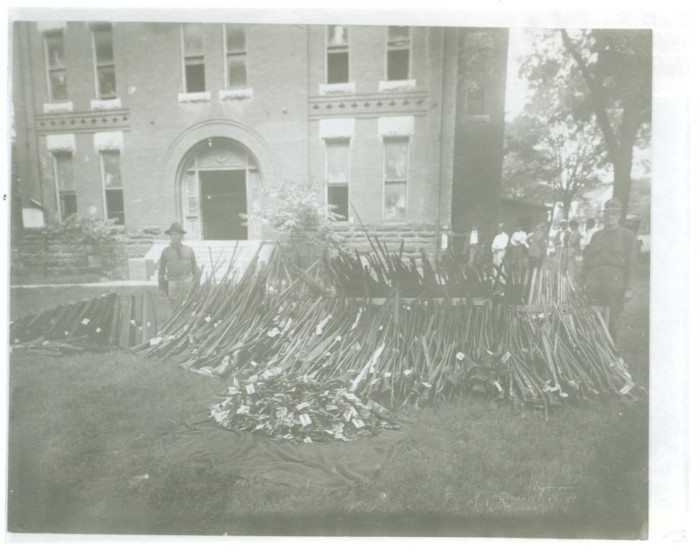